Corporate English jargon. Let's stop beating around the bush for a second: it is polarizing at best and utterly perplexing at worst. At some point, every adult will hear an idiom or phrase that doesn't make any sense. And then are forced to spend way too much time thinking about what it means, who bothered come up with the dreadful saying in the first place and then reaching through space and time to tell that mythical person off for creating the idiom that continues to torment poor unfortunate souls for the rest of time. If you have been there, I feel your pain. If you haven't, you are either lying to yourself or lying to the world so feel free to pick whatever tickles your fancy.

In case you live under a rock, idioms are phrases or expressions that present figurative and non-literal meanings of the phrase- used primarily as socially acceptable means of torture. The part about idioms being used for torture was just added in for dramatic effect so you can ignore that, but otherwise that is the definition. Anyway, some people use idioms to make their language more interesting, others use them when they can't find the words to describe a phenomenon. At the end of the day who actually knows why people do and say the things that they do. Over time you should learn that idioms are pointless, because you would have spent significantly less time by simply explaining what you mean instead of using circuitous language via an ambiguous metaphor to get the point across. Don't be so bold as to use an idiom in casual conversation and get annoyed when native English speakers have no idea what you meant. And yet, a saying like throw the baby out with the bathwater still generates those pale white faces of people who think you just seriously suggested to throw a baby out the window.

The worst and most confusing offenses of using idioms have been heard in corporate America. Confusing at best, offensive at worst here are the top 4:

1. Open the Kimono: a team or company must share its internal workings or projects with a potential buyer

It is 2021. In an office setting or in regular life, it is disappointing to explain that this

saying is unacceptable. A crass and wildly offensive way of asking a teammate or buyer for valuable information or secrets of success; this idiom is doused in both racism and sexism. Unfortunately, it is still being used casually in business meetings and professional communications. Don't be surprised if your deal doesn't go through, or your coworkers walk out and complain to H.R after hearing this one.

2. Get Into Bed/You Are in Bed With (--) : expresses great disapproval of an agreement to work with another person or group.

This is very off-putting to hear for the first time in an office saying. People want to keep their personal lives out of work, and being told to get into bed with a buyer or that you are in bed with another company or person is a jarring experience to say the least. Implying that salacious activity is or should occur in this way has sexist connotations and is a very not safe for work (NSFW) conversation. This saying implies the person or group is inherently wrong for working with your employee, that your employee is wrong for having been tempted to the agreement, or that in order to get business you must engage in under-the-table activities depending on the context. At the end of the day, there are many and far better ways to tell your employees you don't like them working with a competitor that doesn't involve making your coworkers uncomfortable. If you are trying to encourage illicit activities, well - that's your business.

3. Working by Design: When something is working like it supposed to, because it was designed to it is "working by design" 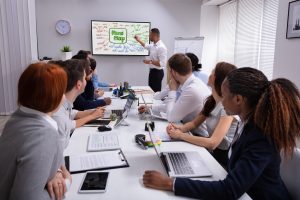 This one isn't offensive, but definitely comes off abrasive, and is often used as a flippant way of dismissing valid concerns or questions. Imagine a scenario: a company sells customer database software, and you called support because you want to display information a certain way but don't know how. You are told "The product we have cannot work like that, because it is working by design." Your valid concern is being disregarded and will likely go unaddressed because that's just the way of things- that's how it was designed to work. When something is working like it is supposed to because it was designed that way, doesn't mean the design is good. In fact, the design is terrible because it isn't doing what the customer needs it to do, and the design should be improved to actually fix the problem that was raised- but it often times won't be altered at all.

4. Over the Wall: to transfer something to an individual outside the company (usually a client)

"When you get that sorted out, just go ahead and throw that over the wall." Sorry...what? This is probably the most absurdly confusing one yet, but widely used in business settings. Meaning to transfer something to an individual outside the company (usually a client) or to outsource the problem to another company. This idiom references historical stories where a big concerted effort is exerted to throw rocks or flaming objects over castle walls. In medieval times people would literally throw huge things over the castle wall for someone else to deal with, so this saying means you are going to pass something off to someone not in your organization (or castle).

While there are many more idioms that could be used, one thing is clear: communication is important. Especially at work, ensuring direction is clear and saying what you mean are vital to job performance and work culture. Corporate English training online can help elevate communication in your company and improve employee performance. At the very least, stop speaking in confusing corporate English jargon and idioms and expecting employees to know what you mean.

Offered in Spanish, Portuguese, Arabic, Russian, Chinese, Haitian Creole and Vietnamese, our highly engaging In-Person English classes and interactive English classes online with live native-speaking teachers are easy to access from wherever you are. We offer Real-Time Small Group and Private Lessons. Take our  free Online ESL Placement Test or register for one of our upcoming  online English Language courses.

View all posts by: Molly Romano